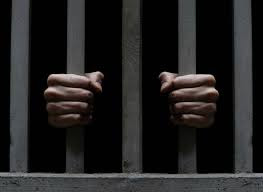 The bars were icy cold and invincibly strong through which could be glimpsed a grey, gloomy corridor lined by narrow prison cells winding away to infinity.

The cells were occupied by men shunned by sane society, imprisoned for life, and he was one of them, though he, even after two and a half decades, did not know why he was there in the first place.

But tomorrow would be another day when he would be set free, on parole, on account of good behaviour.

Tomorrow he would walk out of this sinister dungeon with his head held high, a smile on his face and a secret pulsating in his heart.

Tomorrow he would head straight to his cottage amidst the lonely hills where he knew she was waiting for him, with thudding heart and thirsty lips, whom he had murdered with his own hands, two and a half decades back and courted arrest!
This is shared on Five Sentence Fiction - Flight
এর দ্বারা পোস্ট করা vanderloost এই সময়ে ১১:৪২:০০ AM

You will also find me on

vanderloost
A wandering soul with half etched footprints on the sands of time.............